Yep! The little one is officially 2 years old! I want to know: What is it about birthdays that naturally drives the mama to make sure that the celebration goes smoothly at all costs? How much do the kids really care about the details at 2? First case in point: CAKE. That sucker was the bain of my existence for one day. I woke up on the 20th with one thought only: get the cake right and make it edible by 3pm when the other grandma arrives. Okay, yes, I failed. I woke up and immediately cooked the super mom cake from scratch. When I inserted the first well meaning toothpick, the cake deflated. I deflated. I waited a couple of hours and deliberated between baking another and sending the papa off to fetch a premade savior. We decided to try again, instead. All was well... and then the timer went off. My mother-in-law confidently opened the oven and I watched both cakes meet their demise. Deflation the second. Ugh. Behold the first set of defeated cakes! 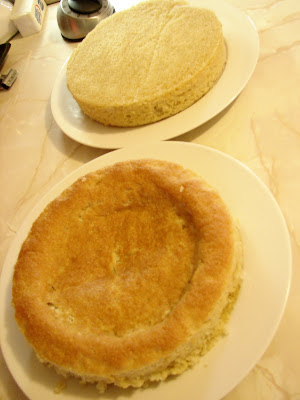 Did the 2 year old care? HA! He was too busy playing with his vehicles to notice. 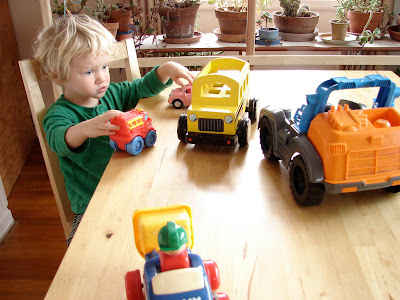 Oh! And then the balloons arrived! Fat chance of expecting any consciousness beyond "Wow, the balloons are colorful and fabulous". Thanks Daddy! Good idea!!! 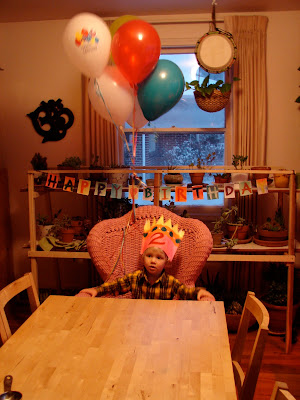 Next, he opened some gifts. Monkey after monkey made itself known... 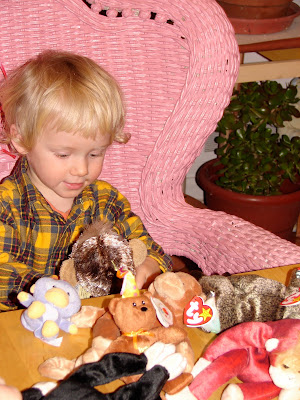 There were some coloring books... Elmo themed, of course (with a portrait of the kiddo on the package): 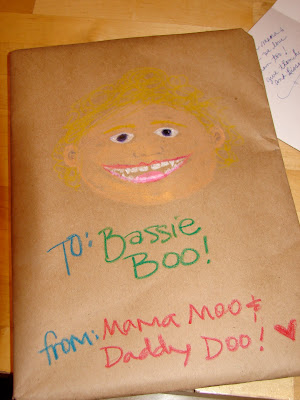 + some hand wrapped and decorated surprises sent by mail from the other loved ones: 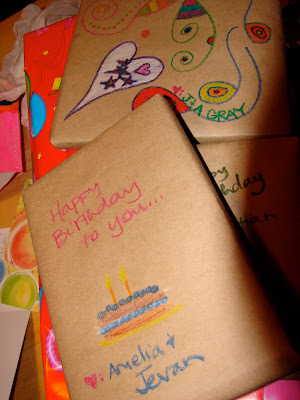 And, of course, 2 grandmas made it for the celebration! Grandma Winnie had as much fun as the birthday boy! 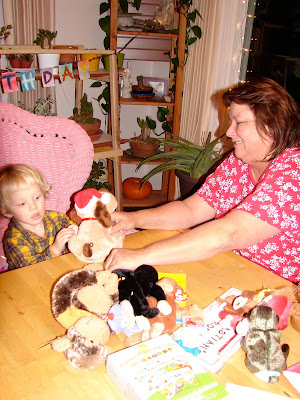 The prized gift! Sebastian reeeeeally wanted this toy jeep. Really, it was the only thing he asked for. I made a sneaky move into the toy store one day when I sent Dad and Bas to fetch some reverse osmosis water at the grocery store... Sebastian led me to the toy store a few days later and was distraught to discover that "jeep" had disappeared. He stared for a long time at the empty shelf and then said something along the lines of, "MAMA! Jeep all gone!!!! OH NO!" I talked to him about how some nice parents must have purchased the jeep for their kiddo. For 2 weeks, Sebastian would walk up to me and talk about how the jeep was gone and some lucky kid would be getting a gift. Poor little guy had no idea that he was the lucky kid. 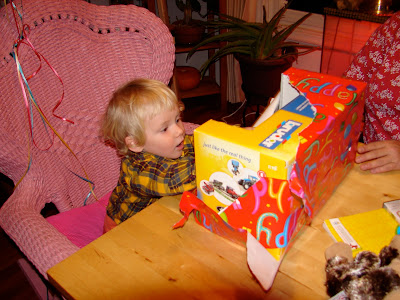 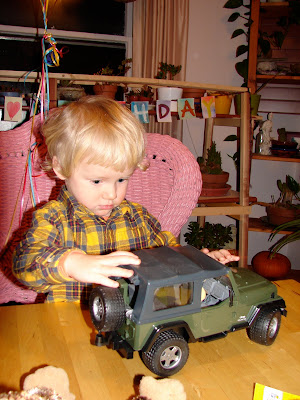 And then there was the car... Grandma Winnie had mama pick up a ride around car for Bas (the 30th anniversary edition of the car mama had when she was a kiddo). This was the straw that broke the camels back, for sure... At bed time this kid still would not get out. 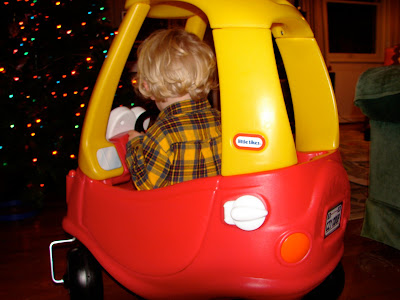 The cake did prevail after all! We took the first two cakes and carved them up to fill in the fallen parts of the second two... then we added a blueberry jam (by birthday boy request) and frosted the poop out of it. We then decorated with black and blueberries. Oh my! I cannot tell you how delicious the cake turned out. Pure bliss served up alongside vanilla ice cream and blueberry gelato. We could not keep the boy away from the berries. He also made a wish (or at least blew out the candle on the first try). 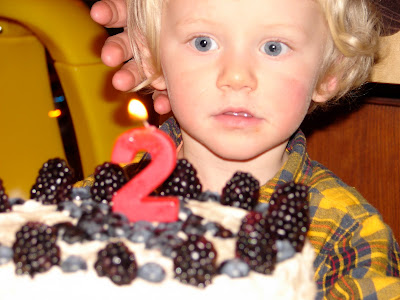 By the end of the day he was flat out done. Thankfully, Mama only cried twice. #1: Cake ruined!!! (and then revived... a blessing in disguise). #2: @gift presenting time, Mama could not find the gifts for about 8 minutes. Two closets were torn apart, tears discarded before someone asked if they were in the closet by the dining room. OF COURSE... A foreshadowed easy location. I am ashamed to admit that in those 8 minutes I referred to myself as the worst mother in the world. I mean really... Who forgets where their birthday baby's gifts are?!? 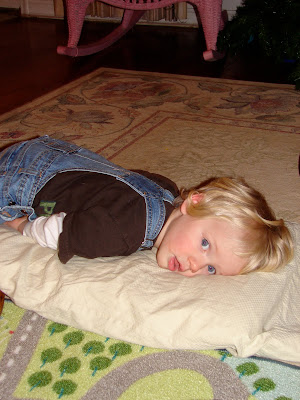 All is forgiven, truly. It was an all around good time. Sebastian has way more than his share of toys, he LOVED his cake and berries and he had so much fun with 2 of the grandmas (and grandDud & Daddy & Mama). He loves his book and Yo Gabba Gabba video from Uncle Jevan and Aunt Amelia. He cannot stop drawing on the chalkboard of his easel from Banana Alta and Lenny... And he can't get enough of his "street rug" from Grandma Myrna. Success!!! Next year? Mama will have less emphasis on making it all perfect, because in the end it *was* exactly as it should have been.
Posted by T. Shakti at 12:53 AM